Frank and Mikey were awoken this morning by Gregorian chanting. In fact, the albegurge in Ventosa starts playing it from 6am until the last pilgrim leaves. In theory, this is really neat – almost magical. In practice, it’s the equivalent of playing “Flight of the Bumblebee” with only one cashier while in line at the grocery store. Basically, the longer we waited for open bathroom sinks or a space to pack our gear the more we grew annoyed by the canned monks!

At long last, we grabbed an “English breakfast” (eggs, bacon,oj, and coffee) in town before heading on what would be one of our longest days.

A final look back towards the church in Ventosa.

Much of the day was spent walking through fields. Notice the snow-capped mountains in the background. 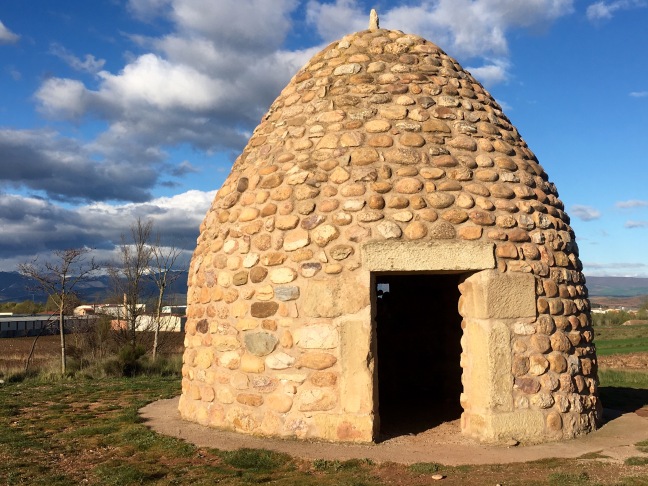 This was one of several beehive shelters we happened upon. Not really sure about its purpose, but it looked pretty dope.

Frank on a bridge in the town of Najara.

A fortified romanesque palace in Najara.

After some 40km (10km or 6 miles further than intended), we could see Santo Domingo in the distance – 3km away.

Probably one of the most unique fountains we have encountered. Notice all of the Camino symbology.

The Cathedral in Santo Domingo.

A bewildered pilgrim Mikey with pollo and pantaloons. Ok, this needs explanation:

Long ago, a father, mother, and son were traveling along the Camino to pay homage to the remains of St. James in Compestella. They spent the night in Santo Domingo where the daughter of an innkeeper made romantic advances on the young man.

When her amorous feelings were not reciprocated, she placed a silver goblet in the boy’s pack and then alerted the town sheriff that a theft had occured during the night. As fate would have it, the goblet was located in the lad’s bag and he was hanged from a tree outside of the town.

As any good pair of pilgrim parents presumably would, the couple left their son behind and carried on to Santiago de Compestella where they prayed for their son’s soul. Yet, upon returning to Santo Domingo, they found the boy miraculous alive though still swinging from the tree. The father and mother burst into the sheriff’s cottage, interrupting his meal of roasted fowl, and pleaded for their son’s life.

Infuriated by their insolence, the sheriff declared that their son was no more alive than the roasted chicken on his dinner plate! At that moment, the fowl crowed and lept up from the table. In awe, the sheriff marched out to the gallows where he had the still living young man cut down from the tree before granting him a full pardon.

To this day, there are kept both a hen and rooster inside the cathedral to remind the faithful of the power of prayer and intercession of the saints. (Mikey just thought the cutout looked cool!) Hasta entonces.