We returned to Santiago de Compestella from the end of the world and said our goodbyes to Saint James. With one last walk around the cathedral, a final farewell to his remains below the altar, and a visit to the cathedral museum, we finally parted ways with the city. 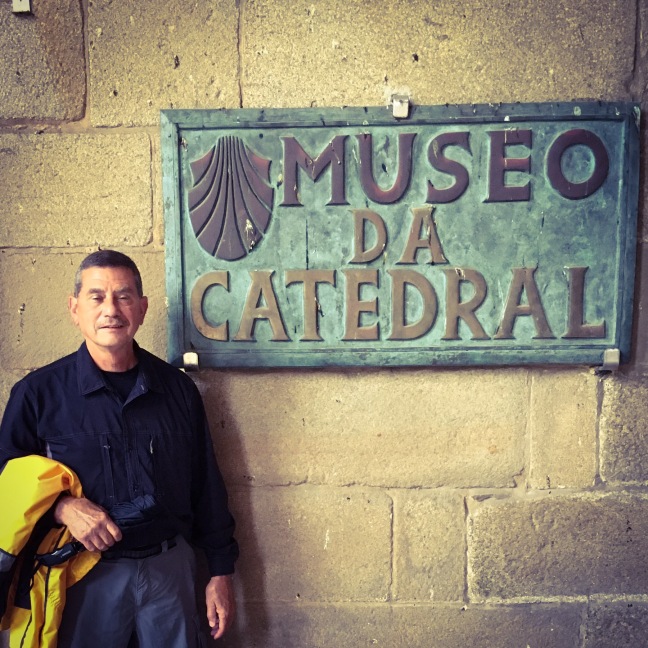 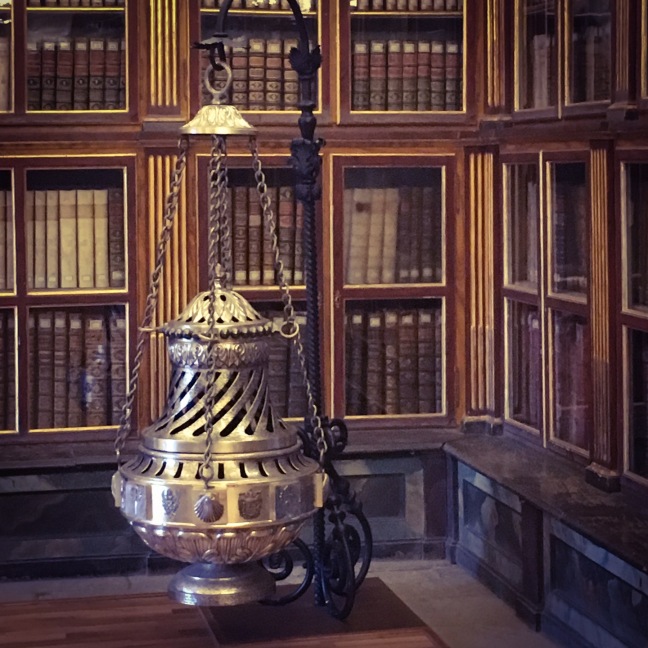 The “spare” botafumiero on display in the cathedral library. 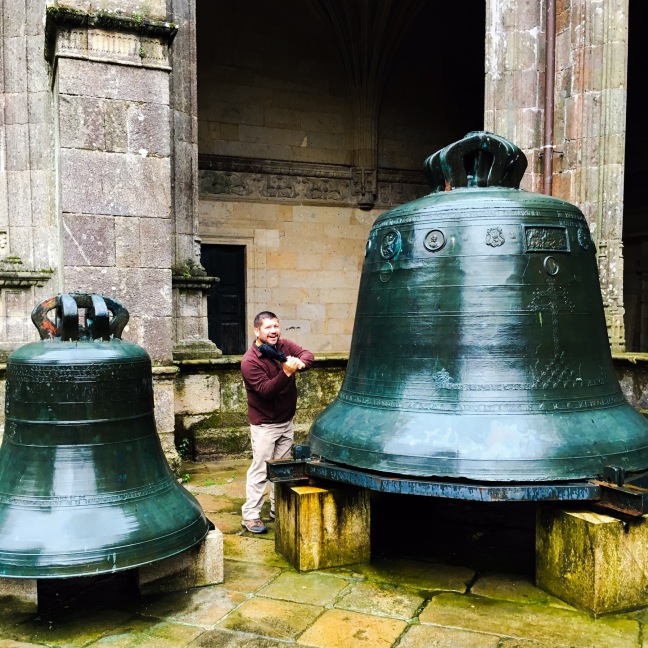 Mikey really likes ringing bells! On the real though, look at the size of these!!

It was, however, a bittersweet departure from Santiago as this city has for so long been our ultimate Camino destination. Still, we once again packed our bags and headed off for parts unknown.

Porto, the major city in the north of Portugal, is known for its dessert wine and ceramic goods. As it has close economic ties with Great Britain, English is an extremely common second language. This is a good thing as neither Mikey nor Frank speak ANY Portuguese!

Moreover, Mikey’s Spanish is useless due to centuries of bad blood between Spain and Portugal. For instance, restaurant menus are normally written in three languages: Portuguese, Engligh, and French. (Don’t even try speaking Spanish!) Likewise, weather maps on Spanish news broadcasts show a gray area where Portugal should be while Portuguese stations similarly blot-out Spain. Like a trailer park brawl, it’s best to just stay out of it! 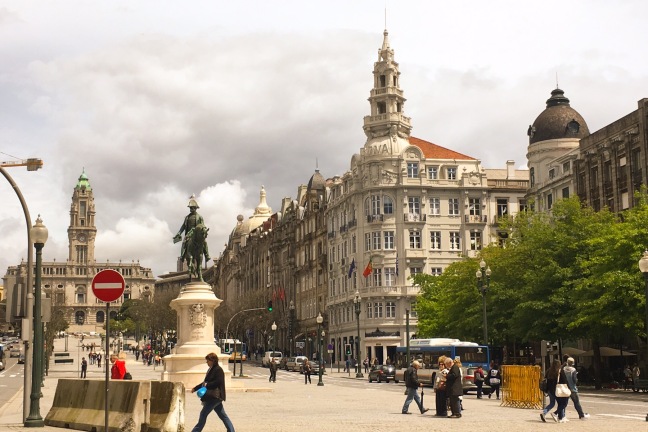 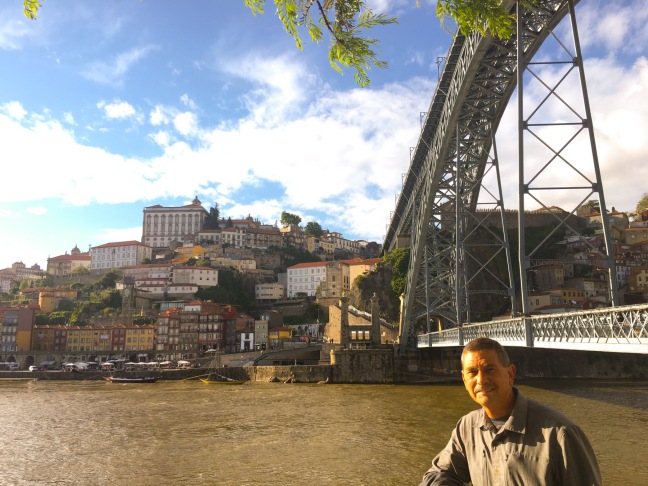 Mikey and Frank took turns posing in front of the Dom Luis I Bridge. It’s a double-decker metal bridge that has become quite iconic for this city. Oh yeah, we walked across both levels for good measure.

Just can’t seem to get away from the churches! This is the Sé Catedral of Porto. It’s a pretty standard romanesque cathedral with thick walls and narrow slotted windows.

Franks thinks Mikey has taken enough pictures of churches to last a lifetime. Mikey reminds Frank that we are on a Catholic pilgrimage.

But even the most hardy pilgrim succumbs to thirst! As such, Mikey celebrated 225 years of Port wine making with the chaps at Sandeman Vintners. 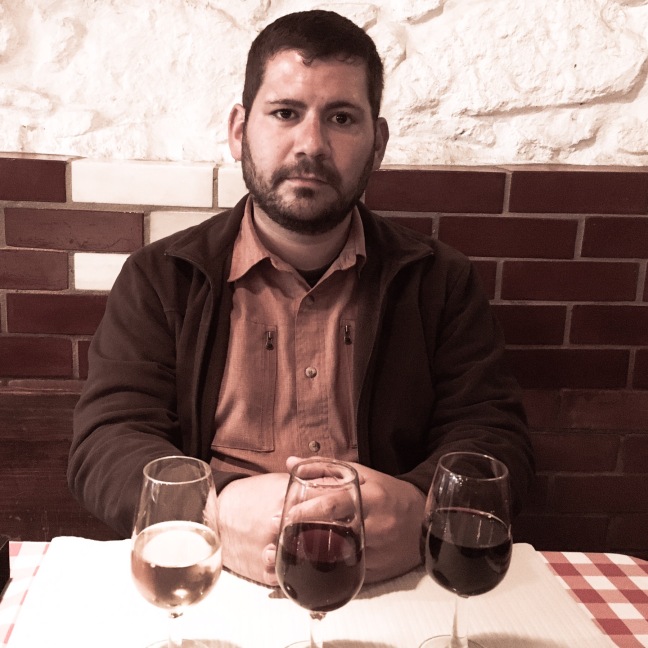 While they’ve had ample time to perfect their craft, Mikey has appointed himself final arbiter of this. Actually, he is using today and tomorrow to research Port wine for future Los Angeles markets. (Frank thinks he just wants the tax write-offs!) 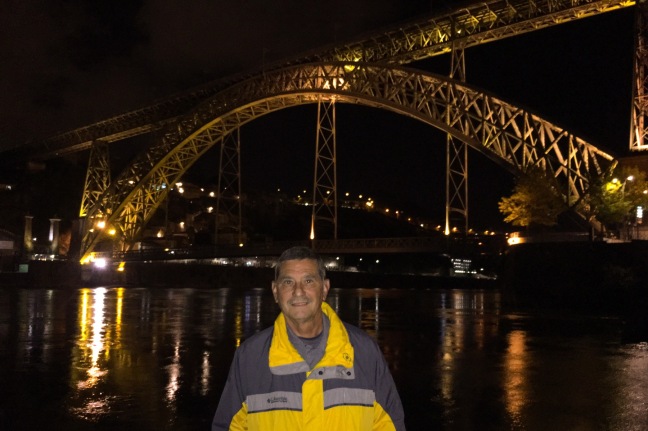 One more pose below the iconic bridge. 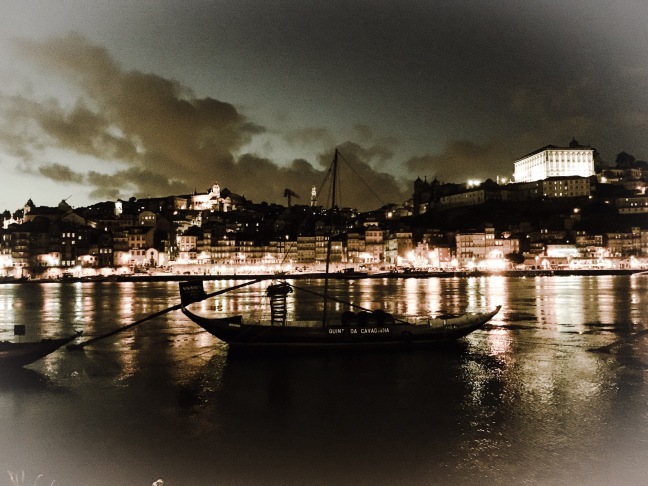 Well, we bid you adéu with a shot across the bay. Prominent in the foreground is a Rabelo boat. This style of small river cargo vessel was designed to transport barrels of port wine downriver to the larger cargo ships that would export Porto’s finest to all parts abroad. Frank and Mikey just walked home.
Anywho, we’d better sign off for the night as we lost/gained (?) an hour today (look it up, Portugal is 1 hour ahead of the rest of Europe.) Let’s just say that Frank and Mikey are e an extra hour tired. ¡Tchau!