After a month of getting up early to hike, we really do appreciate waiting for the sun to rise. Only, in Porto, sometimes it doesn’t! This morning we managed to sleep in a bit late and still visit the church/museum/catacombs of “Sao Francisco.”

The exterior is a mix of 16th century Gothic and earlier Romesque styles.

The interior is a VERY interesting blend of artistic styles with Baroque carvings dominating the main altar. 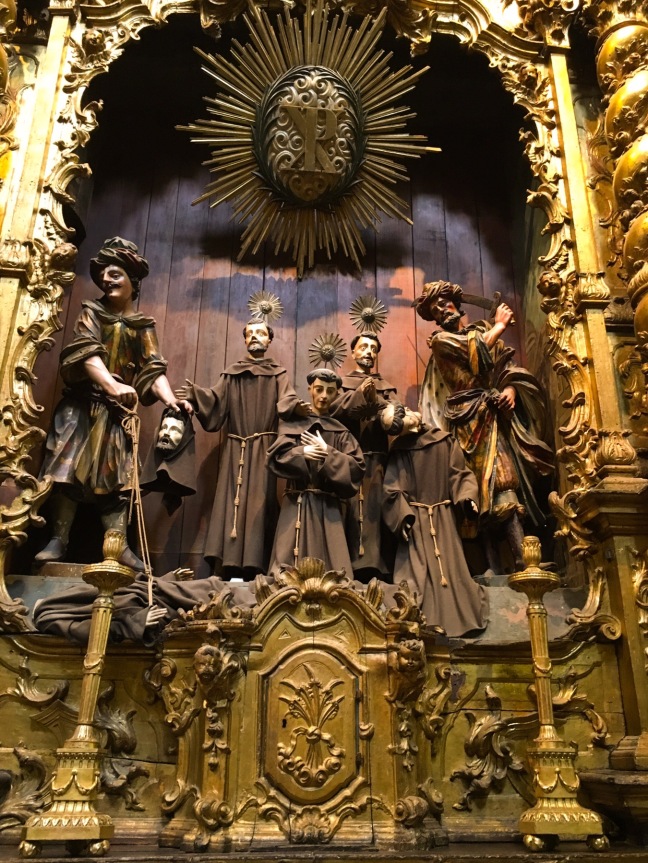 This was an curious and graphic altarpiece depicting the slaughter of Christian monks by Moorish invaders.

A main attraction at Sao Francisco is the catacombs. Actively used until the mid to late 19th century (when interment within churches was banned by the state), it is a true time capsule of Porto’s “Who’s WAS?!”

OK, so here’s a little trivia for you: the USA is one of the few countries in which one can “own” a grave. In most of Europe (and the world), one technically “rents” a spot for a hundred years or so. Then, after the body has decomposed, the bones are removed from the grave and placed into an ossuary. This makes room for new tenants.

Talk about tight quarters! We see the evidence of slum-lord practices by looking through a grate in the floor into this mass ossuary.

Enough creepy catacombs for one morning! We headed down to the river for lunch and a tour of Graham’s cellars.

The view from Graham’s terrace was a bit overcast, but stunning (as was the look on Frank’s tired face after walking all the way from the two towers you see on the top left!)

Mikey thinks this view of him is just fine! 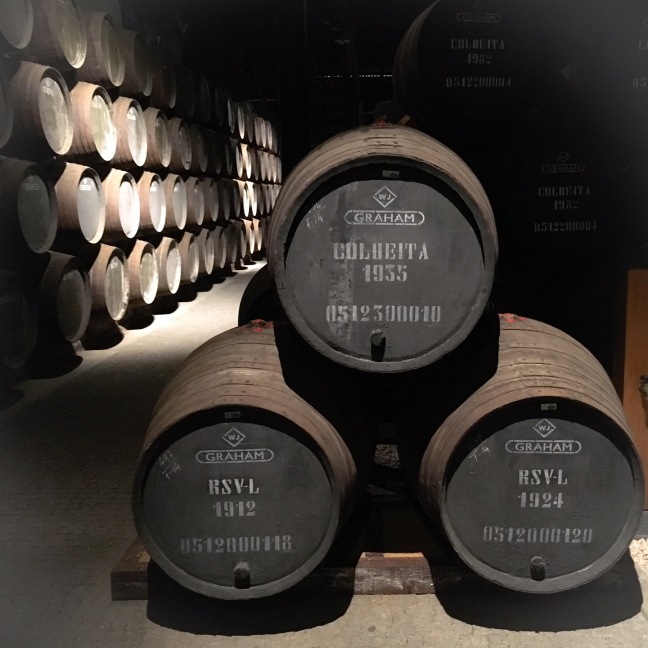 Much of our tour took us through Graham’s cellars and private bottle collection. Notice the dates on these barrels – they’re actually storing wine from those years (1912, 1924, and 1935) for use in future special releases!

Speaking of special releases…(that’s a shoutout to Kerry Dean!) Graham’s keeps their family’s private collection on premise. It contains a hoard of bottles from the most exceptional years.

Speaking of exceptional, Mikey got to do a tasting in the “Reserve Library” room following the tour. Oh, and that amber colored one in the middle is a 40 year-old tawny that goes for around $100 a bottle. But, the innocent looking one on the right is more like $150. While you probably won’t find these specific ports in the US, Mikey is already planning on bringing some tasty ones to the LA market!

Then there was the port and chocolate tasting at Kopke – the world’s oldest port house.

But there was weird stuff, too. For instance, Porto is famous for its hand-crafted ceramics. So, in addition to plates and such, its artisan entrepreneurs have gotten quite creative in making keepsake figurines. Take a look at one display:

Yeah, maybe a bit risqué for some Porto-ians.

We also found this jewel of a candle in a window at a Catholic gift store. No pressure, birthday girl, but you’re certainly expected to meet age-specific goals so we can celebrate them by lighting your most demanding candle each birthday. Wow. (Mikey’s biting his tongue right now – something about a candle burning at both ends?!)

We wrapped up the day near Porto’s famous bridge. Sure looks fancy at night! Well, good night and goodbye Porto.

“We’re leaving on a … Graffiti Train!” Yeah, still not sure if the Portuguese trains are actually graffitied or if it’s just a bad paint job. Anyway, we’re headed back to Spain aboard this diesel beast! Hasta pronto.